This is a blast from the past, in the worst way imaginable. I’m a firm believer in the whole those who don’t learn from the past are doomed to repeat it thing. I’ve been meaning to do a ‘history lesson’ type of post on Mincoin, but never got around to it. Seems my hand is forced now, as mincoin was just rebranded and rereleased. Try not to get distracted by bells and whistles – the shiny new client is only there to distract you from the dark history of this coin.

Mincoin was one of the original scamcoins released during the 2013 altcoin frenzy. Mincoin claims not to be premined, but this is demonstrably false by parsing blockchain data. It featured large super blocks at the start, launched with minimal difficulty, and was launched without a working GUI client. The result? A very obvious premine, scooped up entirely by mincoin insiders.

We can clearly see that over 900,000 coins were created with a network hashrate that went no higher than 0.5 MHash, or in other words, 1 mining rig. Keep in mind that the block reward for mincoin is a paltry 2 coins, so this premine was absolutely massive in size. 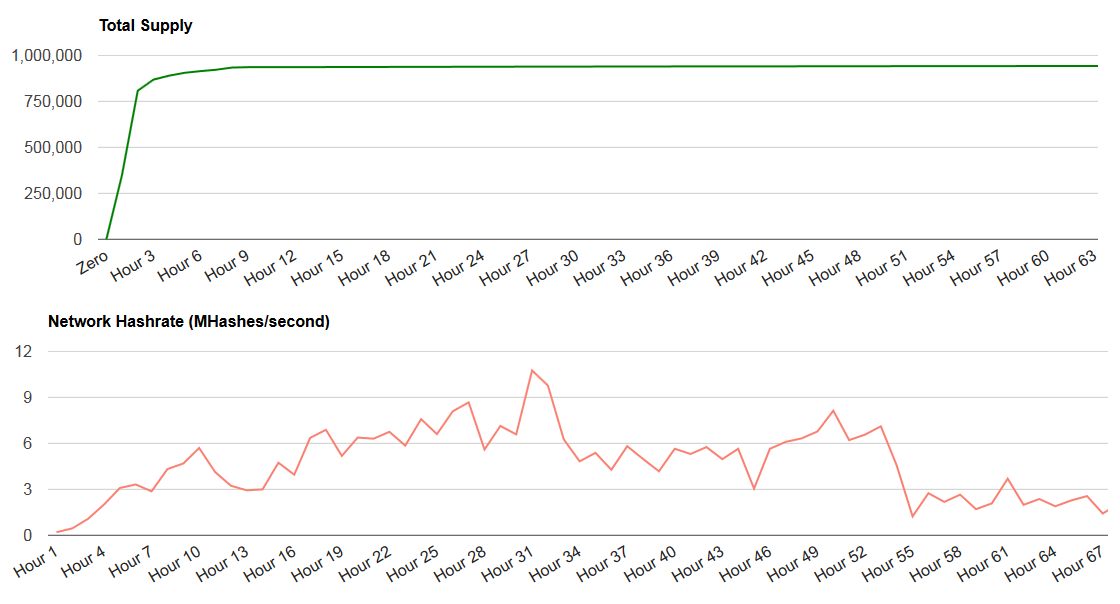 It’s even more damning when you zoom out to a 60 day graph, giving you real perspective on how shamelessly large this premine was.

So, who were the insiders involved in the premine of this coin? None other than Realsolid and his two cronies Vipah and SuperTramp. Some time after release, a proper GUI client was finally pushed out, and RealSolid had rebranded his exchange site MCXNow, originally microcash exchange now, into it’s current form, mincoin exchange now. Keep in mind that this was before cryptsy was a player in the market, and getting onto an exchange was difficult. With all the pieces now in place, it was time to begin the pump.

RealSolid, SuperTramp, and Vipah – collectively controlling the only exchange platform that mincoin was traded, and 90% of all mincoins in existence – had no trouble pumping the price up to a high of 0.003 BTC. What followed was a dump of epic proportions, pushing the price under 0.0001 BTC.

So, how much money did they make from this pump and dump? Hard to say for sure, but based off market data, I would estimate anywhere from several hundred to a thousand BTC, making this one of the largest altcoin heists in history.

That happened about 8 months ago. Mincoin was publicly abandoned after the dump, and it’s been doing absolutely nothing since then, so naturally the price has bottomed out. Meanwhile, the mincoin insiders have been silently stocking up on cheap coins in preparation for round 2 of the scam, which you’re seeing being rolled out as we speak. Notice that the new release thread is self moderated, no doubt to try and censor anybody who exposes them. Guess they haven’t heard of the Streisand Effect… Or maybe they believe that there’s no such thing as bad press? Either way, I’m blowing the whistle on this one.

So, if you weren’t around when Mincoin launched the first time, there’s your history lesson. Avoid this coin like the plague, and anything else that RealSolid is involved in, for that matter.

Disclaimer: The Information on this website is provided for education and informational purposes only, without any express or implied warranty of any kind, including warranties of accuracy, completeness, or fitness for any particular purpose. The Information contained in or provided from or through this website is not intended to be and does not constitute financial advice, investment advice, trading advice or any other advice. Read the full disclaimer here.